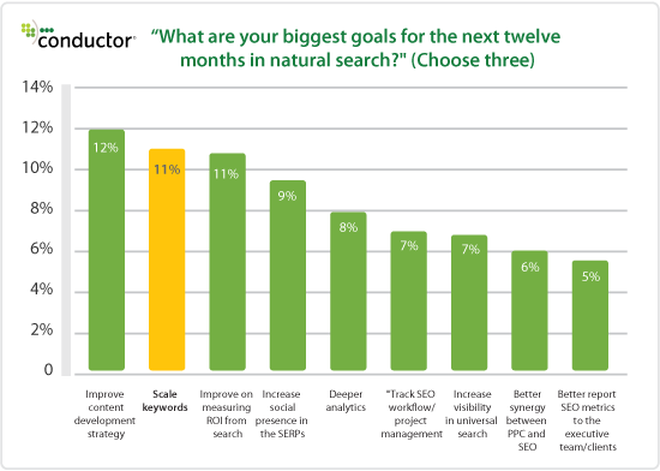 Hot & Cold Trends In Search Going Into 2013
by Nathan Safran

The end of the year in any industry marks a good opportunity to look back on the year and reflect on changes. This is particularly true in the SEO industry, given the volume and intensity of changes that have occurred in 2012 - from algorithmic changes to how SEO is perceived in the organization to changes in how SEO professionals work with data and everything in between.

At Conductor, we spent a bunch of time sorting through the many changes we've all seen in the SEO industry this year. Below, we call out trends in search we think are on the rise and also those we think are trending down. Wherever possible, we backed our viewpoint with empirical evidence, but of course your view may vary, so please tell us in the comments where you disagree or think we left something deserving off the list.

A thorough assessment of changes in any industry must include evaluation of both core and ancillary elements taking place in the industry, so our evaluation extends beyond just the SERPs. One place to look for change is within in the organization.

Close analysis of how the perception of SEO has changed in the organization includes how budget allocation, headcount, and technology adoption serve as indicators for how recognition of the opportunity in SEO has changed in 2012.

Consider the following statistics:
All of these changes are downstream from increased recognition of the opportunity in natural search.

A Q4 survey of 616 Marketers showed their second biggest goal in the coming year is scaling keywords:

In terms of scope in 2012, the Penguin algorithm update was relatively miniscule, affecting only 3.1% of queries. Its impact on the industry, however, was far greater, as the de-emphasis of thin content in the SERPs drove SEO professionals to place a renewed emphasis on creating - and marketing — quality content.

On the flip side, while quality became the new standard for content in 2012, the kind of thin content that used to drive publishers up the search rankings became verboten. Consistent Panda updates every month or so were coupled with thePenguin update that slammed bad linking practices and keyword stuffing.

There were, however, numerous complaints from legitimate site owners (including SEER Interactive who was banned from Google for a short while) who felt they were unfairly caught in the new update. Either way, the 2012 algorithm updates went a long way toward making thin content a 'cold' trend this year.

As the industry has evolved and search marketers have become increasingly sophisticated, the sophistication with how they use data and the insights they seek from that data has evolved with them.

Much has been written this year about the arrival in the industry of 'Big Data,' and along with new and robust data sources comes a shift in search marketers' expectations about how they will be able to leverage insight from disparate data sources together in one place.

Now, marketers want Natural search visibility data together with Web traffic data, PPC data and social insight to provide them with a more complete view of their inbound marketing funnel.

In late 2011, as Google began rolling out encrypted search, the keyword [Not Provided] began appearing in Web analytics, growing to ultimately replace up to 24% of total organic search traffic. The aftermath left industry participants up in arms about losing valuable keyword data, and it was a topic of frequent conversation at industry events.

Over the course of the year, the industry pulled together to develop work-arounds that would recover at least a portion of the lost data and gradually learned to live with it. By late 2012, the topic was far less discussed, both at industry events and in leading industry publications.

Rand Fishkin talks about how link acquisition has changed by referring to 'the death of link building and the rebirth of link earning.' By that, I think he means that while link building used to be a process involving an active 'going-out-and-building' process, it has evolved to become one where links are earned more 'by merit,' where the best content earns the links.

The evolution of the traditional link-building process in 2012 also brought with it a new concept: link cleanup. With the launch of link-disavow tools from both Google and Bing (if you listened closely you could practically hear the industry cheer at their launch), SEOs could now clean up their link graph, a foreign concept before the algorithm changes of 2012.

While 'link-earning' is hot, 'link-building' - the traditional process of actively building links via comments, directories, outreach and other active methods is less so. What began as an active 'go-out-and-get' process has largely evolved into a passive 'sit-back-and-earn' process.

Over the course of 2012, the SERPs themselves changed perhaps more than any other year since Internet search became a reality. From social in the search results to reviews alongside local queries to Google authorship to the Knowledge Graph, a great deal changed in the SERPs this past year.

For the SEO professional, there are (at least) two important takeaways from the extent of SERP changes that took place this year. First, while the changes are rife with threats to your search visibility, they are equally filled with opportunity.

Changes in how you seed content on social networks, leveraging the rel=author tag to add a visual component to content creators on your site, and more, are all opportunities disguised as threats to the marketer that understands the changes and chooses to take advantage of them. (And, don't forget to go beyond globally understanding the changes by understanding the specifics of how they impact your vertical for your specific keywords in the SERPs.)

The second takeaway is more of a passive and forward-thinking one. That is, the extent of the changes Google introduced this year says a great deal about their willingness to introduce changes into the SERPs - the space that still generates 97% of their annual revenue.

Whether it's social in the SERPs, author profiles tied to content, local query review information or generic user interface changes, Google has sent a message loud and clear this past year that they are more than willing to introduce changes - even big changes - to the look and function of their search results page. If, in the coming year, you are not prepared with a mechanism for evaluating how ongoing changes impact the search results for your keywords, you might be left at a competitive disadvantage.

We're going to take a bit of a controversial position here and say that, despite the industry attention around it, we're going to position mobile in the 'cold' bucket, at least for the present. Now, before you fire up your Comment Flamer 5000, we're not saying that mobile as it relates to a growing driver of Web traffic is insignificant, nor are we saying that there are not definitive multi-platform user experience considerations for the site owner to act on.

But, we do want to position the hype and point out that, by our analysis (12 million visits across 25 sites in a one month period), mobile search traffic (smartphone+tablet) is today still only 11% of all organic search traffic.

For some context, that is less than the 12% market share that Yahoo still has, and we don't find SEOs specifically spending time optimizing for Yahoo above and beyond the normal optimization that they do.

To us, that means that an SEO's precious time would be better spent, say, developing excellent content, or mining data for competitive insight, than it would trying to specifically optimize for what is still a small percentage of organic search traffic.

Conclusion: In The Coming Year, Focus On Results, Not Hype. If there is an overarching theme that emerges from our year-end analysis, it's that the industry is maturing and moving toward a 'long-term tactics' schema, away from the old 'follow-the-hype' paradigm. Link building has become link earning, focus on singular keywords has become deep content development, and the scope and synergy of how data is leveraged has never been greater.

So, in the coming year, in keeping with the shift the industry itself is experiencing, make a new year’s resolution to closely focus on the tactics and strategy that will produce results in the long-term. Leave the hype and the algo chasing in 2012.

Find Out What This Means For Your Business By Contact CP Digital today.